It’s an unprecedented match-up of familiar faces. The major-party presidential candidates, Hillary Clinton and Donald Trump, have spent decades in the public eye as key figures of American culture. Their portraits have covered magazines, newspapers and websites for decades.

We asked some of the greatest portrait shooters who have photographed Hillary Clinton to scour their archives and select their favorite photographs from these one-on-one sessions.

Here are the stories, told by the photographers, behind these iconic portraits.—Tara Johnson, Chelsea Matiash and Paul Moakley.

Suzanne DeChillo, photographer, who shot Clinton for the New York Times in Washington on Jan. 31, 1993: “This is Hillary in the famous ‘Cold Shoulder’ dress designed by Donna Karan. During a hectic day before the Clintons hosted their first official dinner at the White House in 1993 – for a brief moment she relaxed and smiled. As first lady, she generated a lot of comment with her dress, her role in health care reform or whether she baked cookies.

As a staff photographer for the New York Times, I was assigned to photograph a food story about Hillary Clinton preparing for the first dinner in the State Dining Room. The writer Marian Burros got a scoop that the new first lady was banning smoking at the White House beginning with removing the ashtrays from the tables in the State Dining Room. Suddenly I was shooting for two different stories, a photographer’s nightmare. We needed a dynamite photo of Hillary and of the marinated shrimp. I spent over 12 hours photographing in the White House. Not only did the Times need several pix of Hillary, but I photographed the White House chef, the pastry chef, the flower arranger, preparations of the smoked marinated shrimp, the Reagan red chinaware and the toast at the banquet for the governors.

The Times‘ front-page smoking ban story ran with a pix of Hillary fussing with the table setting with a portrait of Abraham Lincoln looking down on her. The ‘Cold Shoulder’ picture ran days later in a story with comments on her dress. As First Lady, she generated a lot of comment with that dress, her role in health care reform or whether she baked cookies. In the end, no one complained about the smoking ban. And now, I read that the dress is one of her favorites.”

Deborah Feingold, photographer, who shot Clinton in Little Rock, Ark. for Redbook in January 1993: “We were shooting her for a cover of Redbook. She was on her way (literally!) to the White House with Bill who was to begin serving as president. We were shooting in her home in Little Rock, Ark., where we had the pleasure of meeting Socks, their cat, who moved with them into the White House. What I love about these images is that she was one of the kindest, friendliest subjects I have ever photographed. Contrary to public opinion, I found her to be open, funny, kind and so easy to speak with. These pictures portray the woman that I met and a shoot I will always remember.” 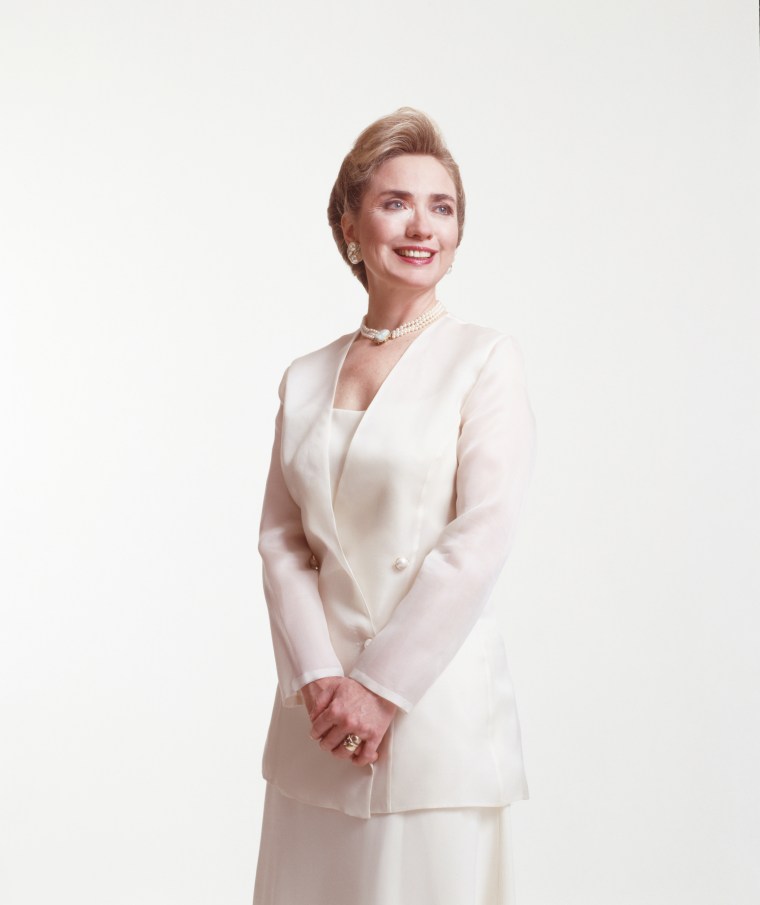 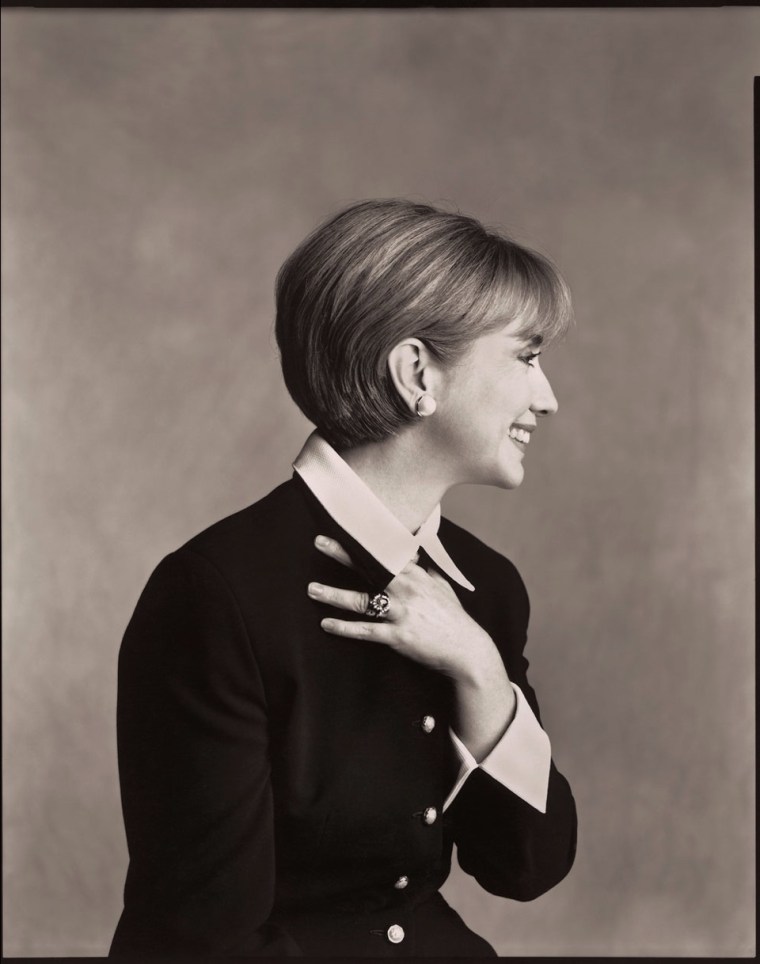 Timothy Greenfield-Sanders, photographer, who shot Clinton in Washington for Elle on March 4, 1994: “This session with First Lady Hillary Clinton was at the White House in 1994. It was going okay, but I could feel handlers behind me nixing the poses that I was suggesting. I’m not big on profile shots but I adjusted my light, asked Mrs. Clinton to look away in profile and at the last minute, I said, ‘Think of our mutual friend, Brian d’Amato.’ She burst into a big smile, a real one… and I clicked the shutter on my 8×10 Deardorff. Mrs. Clinton had once been Brian’s babysitter.” 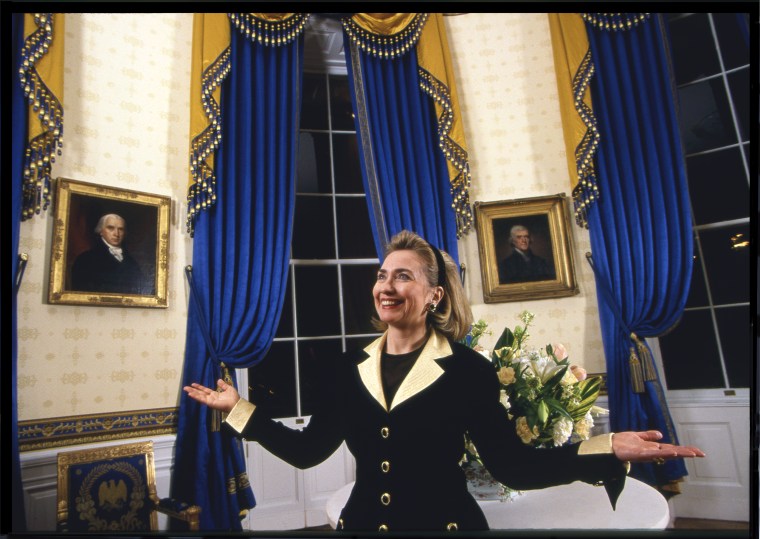 Harry Benson, photojournalist, who shot Hillary in Washington for People in 1995: “I have photographed Hillary Clinton many times — before, during and after her days in the White House. I like this photograph taken in the Blue Room in 1995 because Hillary looks happy and relaxed — like that is where she belongs. She dressed the part — wearing navy blue to compliment the room she had just redecorated.”

Chuck Close, photographer, who shot Hillary for the New York Times Magazine in 1999: “In the chaos of The White House with everyone wanting a piece of Hillary Clinton, she remained an island of calm and helped me produce this and other images. I can’t believe how easy she managed to make the shoot.” 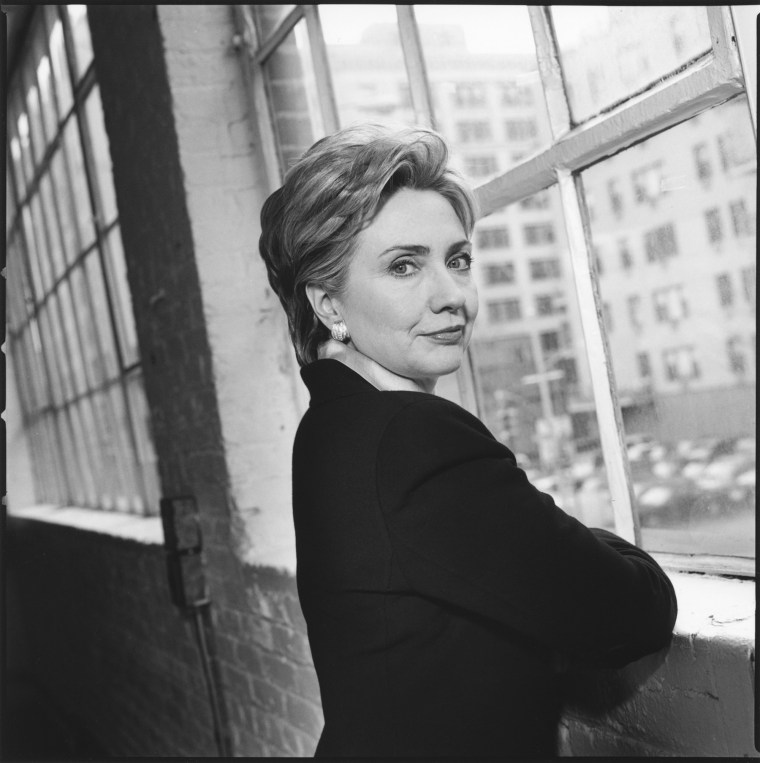 As told by Martin Bell, husband of Mary Ellen Mark (1940-2015), photographer, who shot Clinton in New York City for New York Magazine in 2000: “Mary Ellen took this portrait for New York Magazine when Hillary was running for the Senate in 2000. It was shot at Industria Studios in the West Village. Because of her status as the former First Lady there was lots of security. Mary Ellen especially liked the bomb-sniffing dogs.” 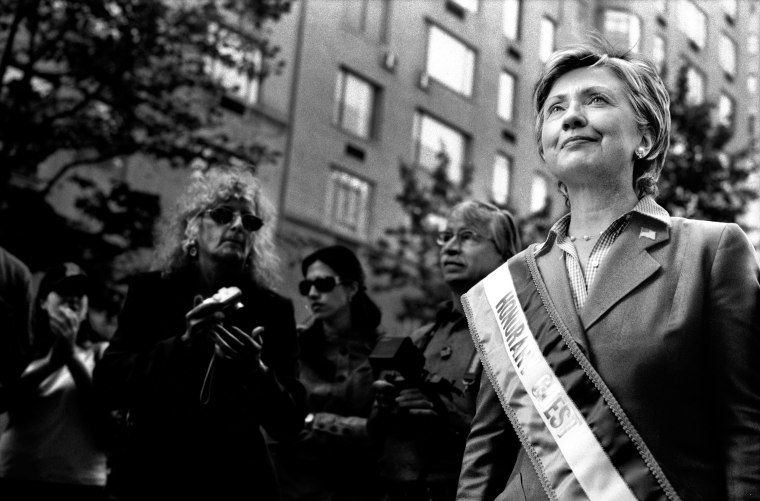 Platon, photographer, who shot Clinton in New York for the New York Times Magazine on Sept. 12, 2005: “I took this picture of Hillary at a march in New York. She was wearing a sash, which said ‘Honorary Guest.’ As she’s surrounded by the usual hangers-on in the crowd, I noticed in the background Huma Abedin wearing her signature dark sunglasses, never too far away from Mrs. Clinton. This is the closest I could get to Hillary. As of yet, Hillary has still not granted me a private studio portrait sitting. Perhaps, compared with Donald Trump, she is more guarded. Perhaps she is more cautious in exposing all facets of her character. Donald Trump has played an all-access – for better or worse – approach in the last year, and Hillary, conversely, has been more controlling and hesitant. In my opinion, both approaches have risks. Saying too much, or not saying enough.” 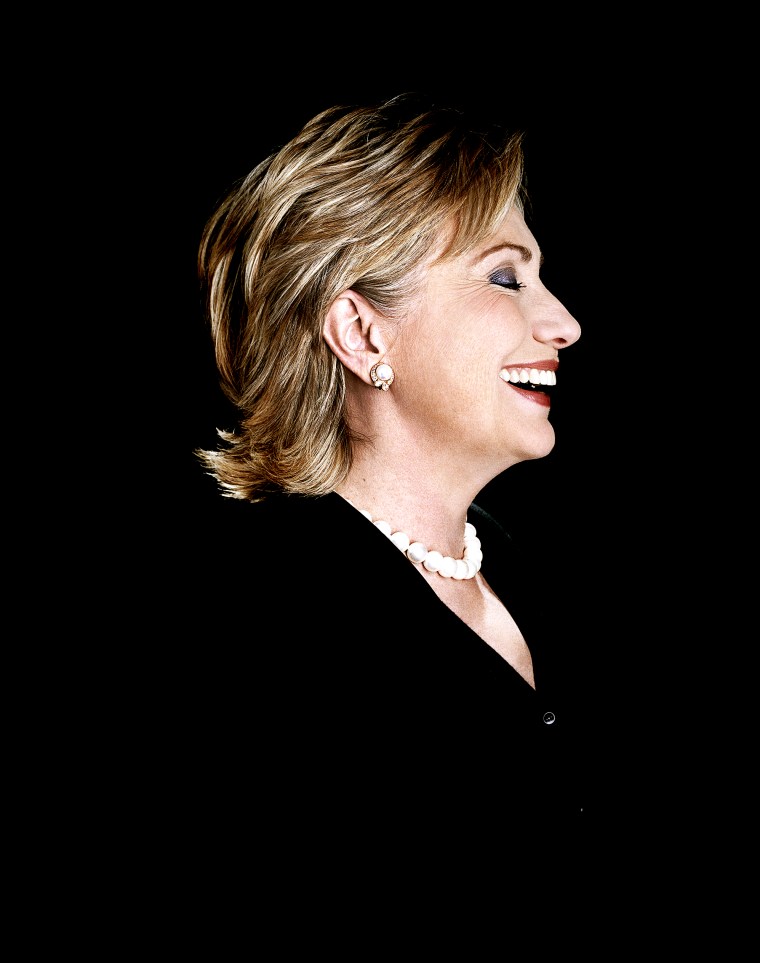 Andrew Eccles, photographer, who shot Clinton in New York City for New York Magazine in 2006: “I’ve photographed Hillary Clinton three times. My experiences with her couldn’t have been warmer, friendlier and more lovely. This photo was made the second time I photographed her in 2006, when she was Senator. Like most politicians she was really well briefed on who I was and she remembered from our last shoot that I had a daughter. I told her that my daughter Isabel, who was five at the time, had referred to two iconic New York City landmarks as ‘The Entire State Building’ and ‘The Statue Delivery’ which made her laugh warmly and genuinely. This moment is connected to me, my daughter and her remembering.”

David Burnett, photojournalist, who shot Clinton in New York City for Essence in July 2007: “Senator Clinton was always, even in moments of distraction, focused on the business that was at hand. If you were lucky enough to catch her otherwise unengaged, that energy would flow into your pictures.” 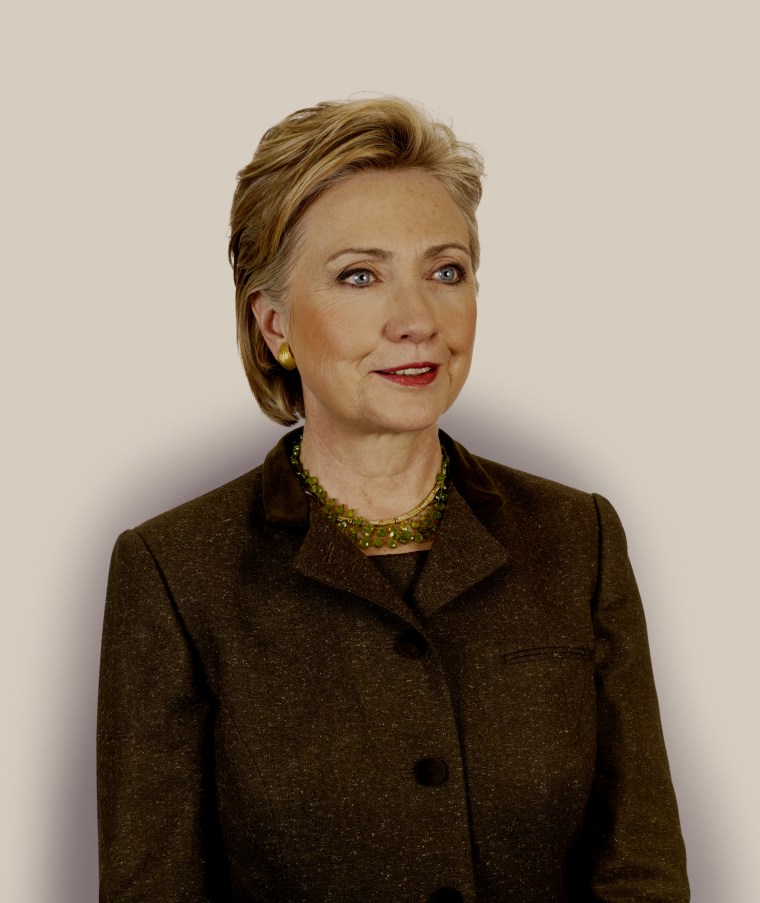 Nadav Kander, photographer, who shot Clinton in Washington for the New York Times Magazine in 2008: “Although it was a joyous time in America I wanted to show the truth of each person or something about the inner condition that was genuine. Within the portfolio I was photographing, I wanted her to portray solidity and experience, something that the young Obama administration needed. A serious cornerstone in a vibrant new White House. She would not let me lift the camera without beaming a smile so the one photo that I got without a smile meant more to me than any others.”

Marco Grob, portrait photographer, who shot Clinton in Washington for TIME on Oct. 26, 2009: “When I began photographing politicians I was often surprised how well prepared and coached they were for our interactions. Often with our second or third meeting the subject would greet us by name, forgoing introductions. With Secretary Clinton, she knew my name walking in the door for our first sitting, which incidentally was my first sitting for TIME. For me, being a European, Clinton looked like American royalty. She exuded opulence and power, with a posture and pose that reminded me of renaissance paintings.” 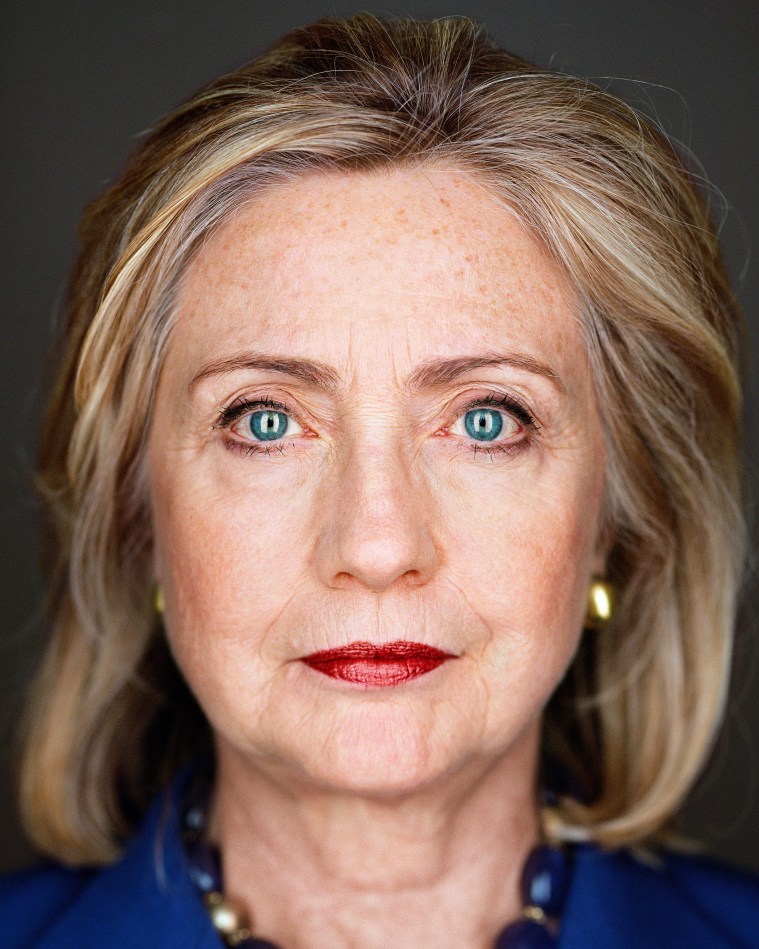 Martin Schoeller, photographer, who shot Clinton in Washington for The New Yorker in 2011: “When I photographed Hillary Clinton, she was a little nervous. I said, ‘You will not look as bad as the Chuck Close portrait,’ and she laughed and trusted me. In this photograph, I think she looks authentic and unposed.”

Diana Walker, photographer, who shot Clinton in Washington for TIME in October 2011: “Having just returned exhausted from following the Secretary on a whirlwind trip to six or more countries, you can imagine my surprise at finding her so totally calm, cool and collected–twice! I was looking for a cover — I found the perfect magazine spread. If I didn’t think about it I would glibly say it’s a double truck image, Hillary on each page!”

Read the Stories Behind the Best Portraits of Donald Trump